Today we'll learn about Yamecha - and what it means to you when you're contemplating to buy a Yamecha at your nearby tea shop or a supermarket. Yes, it's worth the read - as Yamecha is perhaps one of the most accessible options of Japanese green tea you have outside of Japan. Here in Singapore, you can find some stock in Meijiya, or sometimes at DonDonDonki. 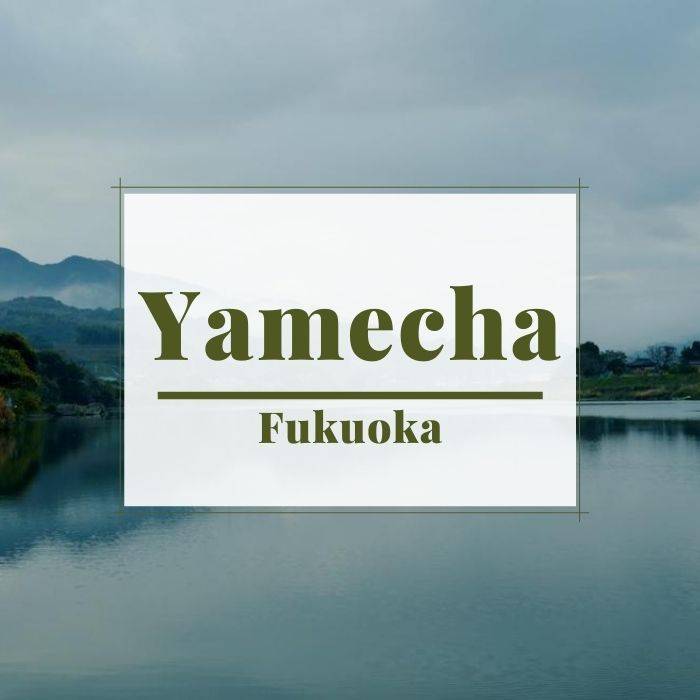 (No, we don't have Yamecha in our Online Shop at the moment! We'll add it in when we find one that matches our concept)

Chapter 1: Why is Yamecha So Famous?

Yamecha is a very well-known Japanese tea brand... You've probably stopped by this page because you've somehow heard about Yamecha and wanted to know more. But why is it so well-known?

It's not considered one of "Japan's 3 Great Teas". That honor goes to the Ujicha, Shizuoka-cha, and the Sayamacha.
Heck, it's not even considered one of "Japan's 5 Great Teas". Honyama-cha, Kawane-cha, Asamiya-cha, will join Ujicha and Sayama-cha for that.
The 1,890 tons of Aracha (or crude tea) it produces sound like a lot. (https://www.e-stat.go.jp/dbview?sid=0003050354)
However, it is merely 7% of the production of Kyushu Island and 2% of Japan! So it's surely not the production volume it is famous for. 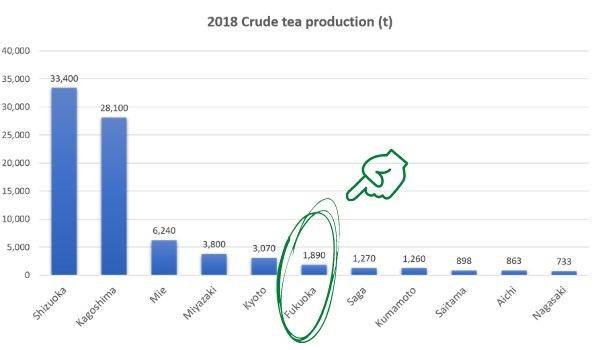 Yamecha Fact: It has a Crazy Track Record of Awards

Let's look into the results of the 73rd National Tea Competition of Japan which took place in 2019.
The National Tea Competition of Japan is the most prestigious tea competition in Japan. It's an annual event that awards the best tea in Japan for that year. The competition is split into 8 categories, and the best tea for each of those categories are decided. 5 winners per category are awarded, and the product which comes up top is crowned the "Ministry of Agriculture, Forestry and Fisheries Award".
Other than this, the "Area Award" award is awarded to the top 3 areas producing the tea for each of those categories as well.
The 8 categories are the below
We'll dive into the Gyokuro department. Remember, Gyokuro is the highest grade of infused Japanese green tea. 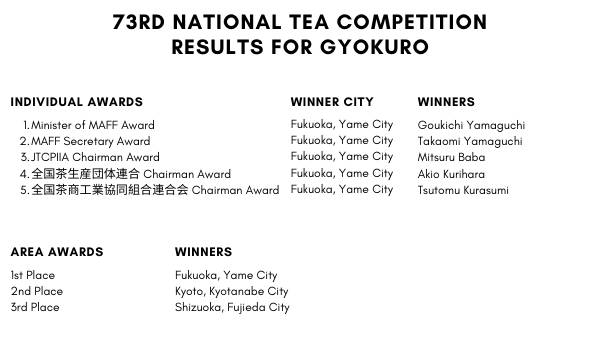 The results are an unbelievable domination by Yamecha in the Gyokuro department. First of all, they have received First place for the Area award in the Gyokuro category.
What this award indicates is that there were several high quality Gyokuro produced in Yamecha for this year. It basically recognizes this Yame area as the producer of the best Gyokuro in Japan.
However, it doesn't stop here. The individual awards are even more of a surprise. Yamecha had actually gone out and won all the top 5 recognition in the Gyokuro category last year.
This is a jaw-dropping monopolization of the awards by the Yame area.
As Gyokuro is the highest quality of the infused tea. Which means that Yame can be said is the king of the best tea in Japan!
It's no wonder you may have heard the name Yamecha before.

Chapter 2: What exactly is Yamecha? The Definition

Now that we know the significance of Yamecha, let's look into it's definition.

Yamecha is the brand name of the tea that is produced in the Fukuoka prefecture of Japan. It is also sometimes called "Fukuoka-no-Yamecha". (It just means "Yamecha of Fukuoka")
The Fukuoka Prefecture boasts 1560ha of farmland dedicated to tea, a consolidation of 2,200 individual farms across the area. 90% of that is located in the Yame area. The crude tea production is 1,890 tons. Both the farmland area and crude tea production ranks as the 6th highest prefecture in Japan.

The weird thing is - Yame is only an area within the Fukuoka prefecture. There are other areas which produce tea as well, such as the Chikugo and Hirokawa areas among others. Nonetheless, they're all lumped together into the Yamecha brand.
http://www.fukuoka-yamecha.jp/location/index.html
Some of you Japanese tea maniacs may be thinking - What about Hoshino-cha and Kasahara-cha? Aren't these also from Fukuoka?
Yes, Hoshino and Kasahara are also areas within the Yame city. Historically they've had their teas branded individually as Hoshino-cha and Kasahara-cha respectively. However In 1925, Yamecha was established as a brand name to consolidate all these individual area brands. This was intended to strengthen the brand of the tea and market the tea throughout Japan.
You can still find tea using these old names. That's why you may have had Hoshino-cha, Kasahara-cha, or say, Chikugo-cha as well. Currently they act as sub-brands to the Yamecha.
By the way, some of these sub-brands are pretty special as well. The Kasahara-cha is the origin of Yamecha, and Hoshino-cha is famous for its exceptional Gyokuro tea.

Let's look into the trademark documents 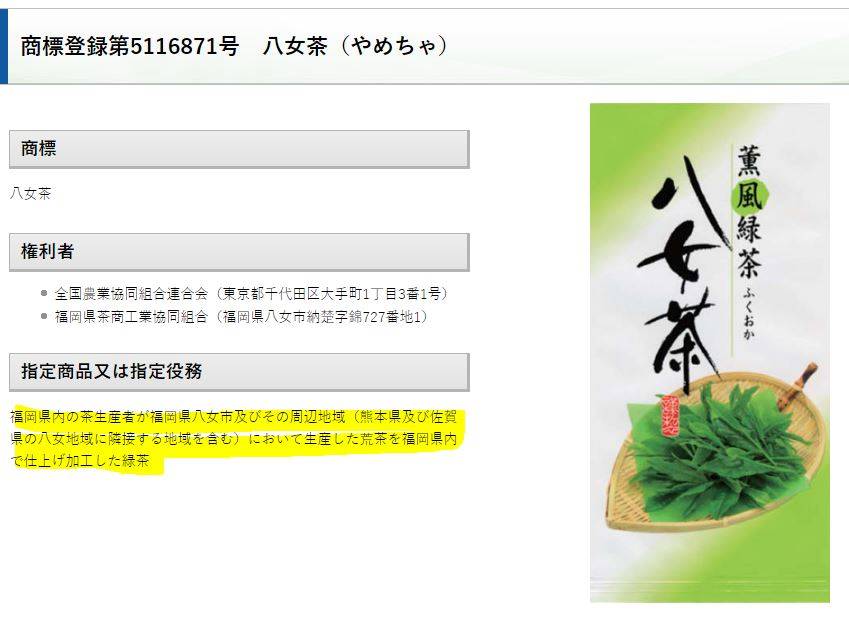 The highlighted Japanese is the definition of Yamecha. I'll go over it later. The next screenshot is of "Fukuoka-no-Yamecha". 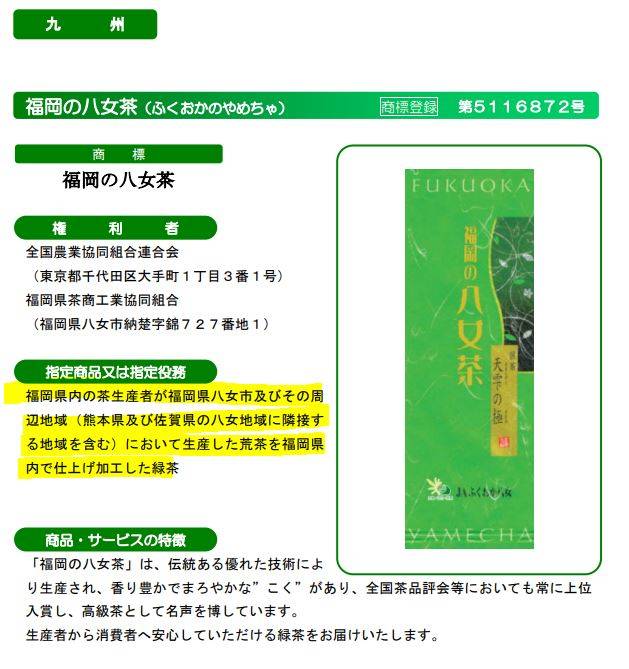 They actually both have the exact same definition. The key points to this definition are the 3 points below.
So the crude tea itself must be from Yame city and nearby areas (which I find ti be a rather vague description), while the manufacturing must be in Fukuoka-prefecture.

Where is "Fukuoka Prefecture"?

Let's touch a little bit on Fukuoka Prefecture.
Fukuoka is a prefecture located on the northern side of the great island of Kyushu. It's a pretty large prefecture with the population ranked at 9th in Japan.
While not known too much for agriculture, their strawberries rank 2nd in the country and can find them outside of Japan as well.
In Japan, "Fukuoka" is known for some delicious local dishes which you may have tried as well. These are dishes such as Hakata-Ramen, Mentaiko, and Motsu-nabe. Yumm!
It's also know as the city where some of the great international companies started from - such as Softbank, Bridgestone, and Yakult.

Yamecha Fact: The 4 secrets to the great taste of Yamecha

A little more about the geography of Fukuoka and Yame.
The Yame area of Fukuoka is located right in between 2 large rivers. One is the Chikugo river , which is the largest river on the great Kyushu Island. The other is the Yabe river. 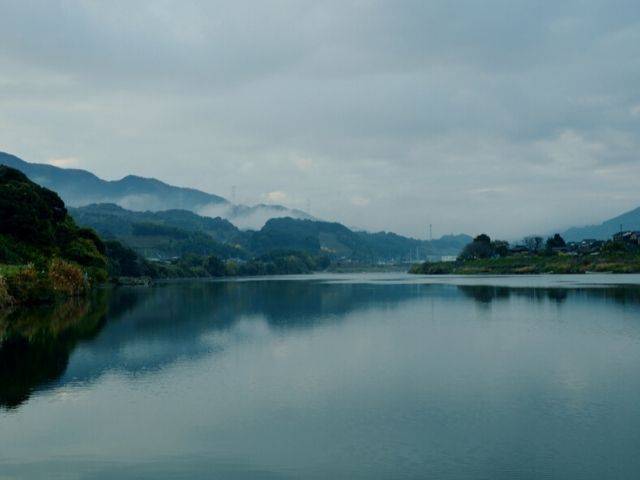 In addition to the existence of these rivers, the area has an ideal climate for growing tea. These are the 4 factors which are integral in making the great tea of Yamecha.

Which brings us next to the topic of taste.

What are the characteristics of this Yamecha?

It can be said that due to these gifted geographical attributes, the Yamecha is made to have a strong umami flavour with a reduced amount of bitter and astringency. This is perhaps the reason it's been dominating the tea competitions on a yearly basis.
Now, that being said, not all Yamecha taste the same. Each tea farm will have different tastes depending on their methods, directions, and techniques. Of course the taste will generally differ depending on the price you pay as well.
Even the breed of the tea may be different. While the Yabukita holds the majority of the share produced in this area, there are 9 commonly used breeds of tea.
Other breeds used in Yamecha include Okuyutaka, Gokou, and Asatsuyu. Each of these breeds will also have different tastes.

However, one thing that can be said about Yamecha is that the tea farms in this area really strive for Quality rather than quality.
Most of the tea farms in this area only conduct up to only the 2nd harvesting. This means that you'll only find Shincha (or Ichibancha) - which is tea plucked from the first harvest of the year - or Nibancha - which is tea plucked from the second harvest of the year.
In a normal tea farm cycle, there can be up to 4 or more harvests within a year. By reducing the cycles to only 2 harvests, it allows for the leaves to grow larger, resulting in a better taste.
The 1,890 tons of tea production is considered low for 1,560 ha of farmland in Fukuoka prefecture, and this is the reason behind this.

Chapter 4: the types of tea it produces

What types of tea is produced in the Yame area?

Yamecha is known for a variety of types of tea.
Outside of Sencha and Bancha, shaded tea such as Kabuse-cha, Gyokuro, and Tencha (which is the crude tea used for Matcha) is also produced in this area.

We've mentioned the dominance of the taste of Gyokuro earlier.
It's actually not only the taste that it dominates. It's also the production volume.
The Gyokuro produced in the Yame area accounts for 45% of the Gyokuro produced in Japan. It's actually much higher than more famous areas of tea such as Kyoto or Shizuoka.
While many of the Gyokuro farms in Japan have switched to using chemical fiber nets to shade the leaves from the sun, the farms in the Yame area continue to use the traditional rice straw to block the sunlight.
Perhaps this is one of the reasons it can dominate in the annual tea competition for its exceptional taste.

Now let's look into the history of Yamecha.

The history of Yamecha is said to have started about 600 years ago, by a monk by the name of Eirin Shuzui. This is about 200 years after tea was said to be first imported to Japan.
In 1423, Eirin Shuzui came back from China where he had trained. As he landed at Hakata port and traversed different areas of where it is now Fukuoka, he became captivated by the landscape of the current Kurogimachi, Kasahara area. There were resemblances of the landscape of the Suzhou area of China where he had trained, which lead him to building a temple at this location.
The temple he built is named Reiganji, and is still open to visit. https://www.crossroadfukuoka.jp/event/?mode=detail&id=400000005702&isSpot=1

Yamecha Fact: The original seed was brought from China

Eirin Shuzui brought back a tea tree seed from China, and also the skills to cultivate and manufacture tea. These were passed to Matsuo Tarougorou Hisaie, who was the village's headman back then. This is said to be the beginning of Yamecha.
Cultivation of tea started there, and gradually spread.
In the mid-18th century, it had spread enough to be called a local industry.
In the 19th century, the Uji manufacturing method had been adopted. In the early 20th century, the areas of Yamecha had rapidly increased and spread into Yame-shi, Chikugo-shi, and Hirokawa-machi, allowing for large volumes to be produced.
Now, this doesn't mean that all the Yamecha succeeds this single plant brought from China. Remember that 77% of Yamecha's breed it Yabukita, which is actually a seed that was created in Shizuoka.
However, it is interesting to know that there were several independent tracks of tea leaves important into Japan in different eras, one of them being the seed brought over by Eirin Shuzui.

Hope you enjoyed this article on Yamecha. Let us know if there's anything else you'd like to know about this tea.
!