The Ultimate Guide to Fukamushi-Sencha
[2021]

Sencha with an additional emphasis on the richness and umami. Everything you need to know is covered here!

Back to Japanese Tea Types

This article was last modified November 28th, 2021. by Yuki

Although this long name - "Fukamushi-Sencha" may seem unfamiliar, you'll be surprised. Actually many of the tea you'll see in the Supermarket (even in Singapore) is a Fukamushi-Sencha!

Let's dive into the details of this rich and mellow tea.

Fukamushi-sencha is another type of green tea that is extremely common in Japan.
Despite being much richer than the normal Sencha in taste, it's generally considered budget friendly, and it also contains much greater levels of nutrients. This makes Fukamushi-Sencha a great candidate for your "everyday Japanese tea".
So, how is Fukamushi-Sencha different from Sencha?
The difference lies in the manufacturing process of the tea. Both teas are steamed to stop the oxidation process of the leaves, but the time spent to steam Fukamushi-Sencha is much longer: it may be steamed up to 2 to 3 times longer than the normal Sencha.
The name "Fukamushi-Sencha" comes from this steaming method. 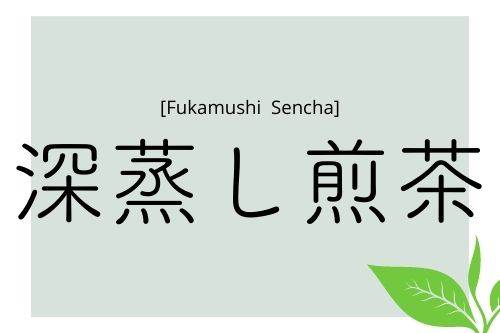 The Japanese term "fukamushi" means "deep steamed", hence Fukamushi-Sencha directly translates to "deep steamed Sencha".
This seemingly minor adjustment to the steaming time actually leads to an array of differences in characteristics of the tea.

Characteristics of the Fukamushi

However, arguably the biggest difference may be evident in the health benefits it provides.
The tea leaves of Fukamushi-Sencha tend to crumble more, as the longer steaming will make the tea leaves weaker. Small particles and powder will fall off of the leaves through the manufacturing process, which will float into the tea and then be directly consumed by us.
This allows for nutrients which usually cannot be dissolved by infusion to also be enjoyed by the body.
Fukamushi-Sencha is a great alternative to the normal Sencha. Try it out and compare it with Sencha - it's a fun and enjoyable way to experience and appreciate the differences.

The Taste of Fukamushi Sencha

Many Japanese enjoy the Fukamushi-Sencha for its rich deep taste. You may be surprised how it is different from Sencha!
Why is it so different?
This is because of the longer steaming period required to generate this tea. It allows the heat to transfer through the entire leaf, causing the leaves to weaken. Then, as the leaves go through the additional rolling and drying processes, small particles and powders will become detached from the leaves. These tiny pieces, which end up being directly consumed with the tea, is the secret behind the stronger umami taste.
While the taste is richer than normal Sencha, the steam also helps the astringent and bitter tastes to reduce. This makes is a smoother drink to consume. It does however, reduce the fresh aroma characterized in Sencha - which is a bit of a minus.

Interestingly, you'll find that Fukamushi-sencha is quite common in certain areas such as Shizuoka (Shizuoka-cha) and Kagoshima (Kagoshima-cha) among others.

It may actually be rather difficult to find normal Sencha. So why is this?

This is actually mostly dictated by the type of tea farm.

There are roughly 2 categories of tea farms in Japan. One is the tea farms situated on the slopes of hills and mountains. Common areas will be places such as Kyoto (Ujicha) or Honyamacha which is in Shizuoka.

The size of these farms are much smaller, and automated plucking of the leaves are difficult as they are situated in slopes. Therefore the quantity of tea will be less.

The other category is the tea farms situated on vast flat farmlands, more suited for mass production. These will produce huge quantities of tea using large and efficient machinery.

The Fukamushi-Sencha is actually very common in the tea farms of the second category. The vast flat farmlands do not have too many obstacles that can block the sunlight from the tea leaves. Therefore the tea leaves of these tea farms become hard. If these leaves are taken to make a normal Sencha, the taste will not be as nice.

The Fukamushi-Sencha methodology allows these hard leaves to become weaker and more suitable for infusion. This is why in large production areas such as Shizuoka and Kagoshima, this Fukamushi Sencha is indeed an important product.

Fukamushi-Sencha contains all the health benefits of Japanese green tea - and more!
Like Sencha, perhaps the main health benefit comes from the nutrient Catechin. Catechin is a type of polyphenol, containing a huge array of health benefits. Perhaps it is the most well known for the powerful antioxidant characteristics it carries. It is said to be more than 10 times the effectiveness of other antioxidants such as Vitamin C or E. Antioxidants are required for your cells to stay young and strong, and is an extremely important, basic foundation of the health of anyone's body.
Not only this, but Catechin also contributes to effects such as the reduction of body fat, reduction of blood cholesterol, prevention of high blood pressure, and hindering of tooth decay. You can read about the details of Catechin and other nutrients in Japanese green tea here.
The great thing about Fukamushi-Sencha is that - you can find nutrients which you may not find in normal Sencha.
These are nutrients such as dietary fibre, chlorophyll which is effective to maintain the intestinal environment, vitamin E, beta-carotene which is a type of an anti-oxidant, and other types of minerals such as copper, zinc and manganese.
These are nutrients that are contained in the green tea leaves, but are not easily extracted and consumed through normal infusion. However, for Fukamushi-Sencha, the tea leaves are crumpled and will float as small particles in the tea. They will end up being directly consumed, allowing for the nutrients that cannot dissolve in water to be absorbed as well. This is in addition to the nutrients you can consume through normal Sencha.
Drinking Fukamushi-Sencha on a regular basis is a fantastic health habit we truly recommend!

When you are shopping for a Sencha at a specialized Japanese tea shop, you may come across the name "Futsumushi-Sencha". Don't confuse this with "Fukamushi" as "Futsumushi" is just a name for normal Sencha. "Futsu" means normal in Japan, and this name is sometimes used for normal Sencha to differentiate from the Fukamushi.

You may also come across the name "Tokumushi Sencha". This is a name for sencha which has been steamed for even longer than Fukamushi. Tokumushi Sencha leaves can be steamed up to 3 minutes.

Since the term "fukamushi" refers to the length of steaming, this can be applied to other types of Japanese green tea as well. For example, there are Kabuse-cha or Tamaryokucha that are made by deep steaming as well.
The term "Fukamushi-cha" is a general name for all the types of green tea with long steaming time.

How to Brew Fukamushi Sencha

The ideal brewing time is about 30 seconds. Since it is already steamed the taste can be easily extracted, hence a short infusion time is recommended.

Use 4g of leaves to brew 120ml of tea. However, always check the instructions on the package as it may very from tea to tea. Learn more about how to brew delicious Fukamushi-sencha here.

Brew at water temperature of about 70-90 degrees. This will depend on the grade of the tea leaf. Boil the water once, and then wait or transfer the water from Chawan (cup used to drink Japanese tea) to Chawan as it will lower the temperature quickly.

Soft water with hardness of between 30 to 80 is said to be the best for extracting the taste and aroma of green tea. The tap water in Singapore is "moderately soft", which makes it perfect for Japanese Tea, but make sure you boil before you use.

How is it made? (Manufacturing Method)

The plant species Camellia Sinensis, also called chanoki in Japan, is used for all types of green tea including Fukamushi-Sencha.

While the species of the plant are all the same, there are actually numerous breeds of this tree in Japan, with each tree carrying different characteristics. The breed of the tea tree used for Fukamushi-Sencha would usually be Yabukita. This is the dominant breed in Japan, usually also used for normal Sencha as well. Others breeds such as Tsuyuhikari is also used for Fukamushi-Sencha.

Throughout the year, the harvesting can happen up to three or four times.
A normal tea plantation will start the harvesting of the leaves around spring. The final harvest will take place around autumn or winter. It is considered the earlier the harvest, the higher quality the green tea. This is because the tea leaves build and store all the nutrients during winter time. When the first leaves come out in spring, they will be rich in nutrients. As the harvesting continues, the nutrients contained in the leaves will reduce.
Fukamushi-Sencha will use tea leaves from either the first or second harvest, allowing for good quality.

Japanese green tea use what is called the Aracha (or crude tea) method. This is a three-part method to make green tea leaves.

Fukamushi-Sencha, similar to Sencha, uses the most basic type of this Aracha method, which is

The steaming softens the leaf, and stops the oxidization of the leaves. This is done immediately after harvesting, preserving the natural enzymes contained in the tree leaves.
For Fukamushi-Sencha, the leaves will be steamed longer than normal Sencha. It will be steamed between 60 - 100 seconds, while normal Sencha will be about 30 seconds.
As you have already read above, this makes the world of difference in the taste and the health benefits the Fukamushi-Sencha provides.

Fukamushi-sencha, while being economic and accessible by anyone, has a great taste and contains great health benefits. This makes it a great candidate for your "everyday Japanese tea".
Try a cup and see if you can make out the difference from a normal sencha. This is one of the ways you can have fun with Japanese tea.
Enjoy!

Are there high-end Fukamushi Sencha?

While the "Deep steamed" method (Fukamushi method) is commonly used to enhance the taste of harder leaves, it is also a method to maximize the umami of premium tea leaves as well.

So while there are many budget options, there are also high-end options which will end up with unbelievable taste.

I drank a green tea in Japan that was very green in liquid color. What tea is that?

There is a high chance it was a Fukamushi-Sencha.

The deep steaming allow the leaves to be broken down and the nutrients of the tea to come out into the water.

Often times, the water color of this tea is a very defined green.

Yes we finally do! There has been so many requests for this, and thank you for waiting.

Please take a look at our Fukamushi-Sencha selection in our online shop.

Yuki is the Editor-in-Chief AND Community Manager at Tealife. He bleeds Japanese Tea and loves being a part of the Japanese Tea journey of others. Writes, does events, conducts tasting sessions, drinks, drinks and drinks tea! Easily accessible - hit him up on whatsapp (+65) 85882980.

Back to Japanese Tea Types