Green tea is said to be one of the healthiest drinks on this planet. How exactly does it help your health? We'll talk about 7 key health benefits of the green tea here. 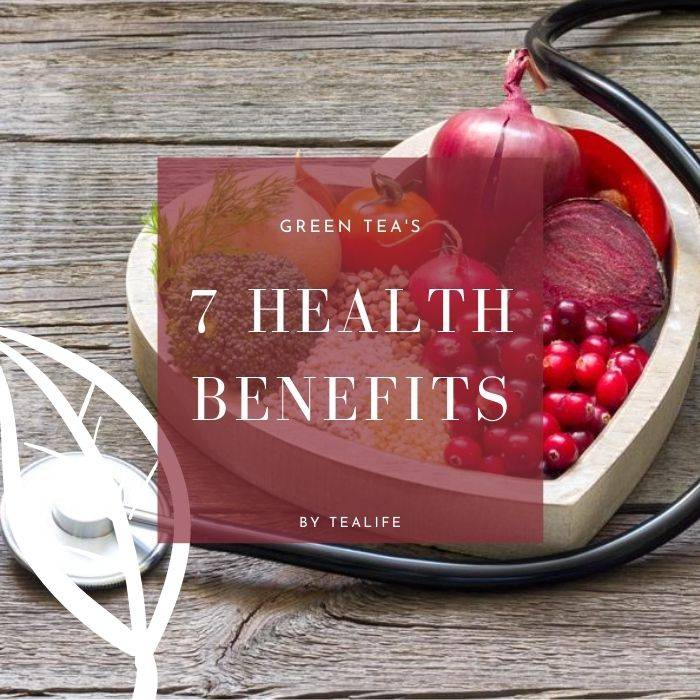 Then, why is it considered so healthy?

Well, the difference is that Japanese green tea leaves are un-oxidized - they are steamed right after harvesting to stop the oxidation. This makes it retain a huge amount of antioxidants & nutrients that have beneficial health effects on the body, leading for it to be tagged the healthiest beverage on the planet.

Let's start off with a summary of the 7 Key Health Benefits of Japanese Green tea.

Green tea is polyphenol-rich, being made up of almost 30% polyphenols!

Catechins make up a huge amount of the polyphenols in green tea, and they have powerful health-driving properties. They are extremely potent antioxidants that cause a reduced rate of free radical formation in the body, leading to a reduced rate of cell and molecule damage.

Vitamin C and E are known to be great antioxidants as well, but catechin is said to contain more than ten times the effectiveness! - which is unbelievably powerful.

Not only this, green tea also contains a fair amount of Vitamin C as well. If you're having genmaicha, or maybe even matcha, you can also get some Vitamin E.

So as a summary, in green tea you get the double-effect of catechin and Vitamins to help reduce the free radicals in your body - leading to anti-aging and a stronger immune system of your body.

Riding on the topic of antioxidants - it is said that they help reduce the risk of cancer as well.

The cell damage caused by the free radicals is said to be one of the triggers of cancers to develop. By taking green tea, you can reduce the chances of cancer cells being developed in the body.

There are also more specific studies on the effect catechin has in cancer prevention. Studies indicate that they lower the risk of getting oral, breast, colorectal, and prostate cancer.

Cancer is such a large cause of human death that it's relevant to everyone - According to MOH, cancer is the leading cause for deaths in Singapore at a devastating 28.8% mark (2018). You can say that green tea can be effective in the prevention of this.

This may sound too good to be true, buy yes, your brain may function better with green tea!

This is because green tea contains caffeine.

While green tea only contains about 1/4 of the caffeine in coffee, it is just enough to stimulate the brain, creating a better mood, increase reaction time, and enhance focus and vigilance.

This causes people to be more agile & productive.

Too much caffeine may be a harm for you, so it's good that green tea does not have too much. On top of this, green tea contains an amino acid called L-teanine which reduces the stimulation effect of caffeine.

This is the reason why green tea is considered a significantly healthier source of caffeine as compared to coffee. It's a safe choice when you have to burn the midnight oil, or need something to boost your performance before playing sports.

Give sencha or fukamushi-sencha a try. If you want higher levels of caffeine, consider matcha or gyokuro and see if it works better than coffee for you.

While we're talking about the brain - In the long-term, green tea can help protect the brain against neurodegenerative diseases, specifically Alzheimer’s and Parkinson’s.

Studies indicate that the catechin compounds contain protective effects on neurons that lower the risk of these diseases.

If you have high cholesterol - you should start drinking a few cups of green tea right away!

Researches indicate that the Catechin in the green tea can reduce cholesterol in the body and help prevent Heart Diseases.

According to the American Journal of Clinical Nutrition, green tea reduces the level of bad cholesterol or LDL, while not reducing the levels of good cholesterol, or HDL.

Additionally, Harvard Health Publishing indicates there are several studies showing tangible positive effects of green tea helping heart disease. In one of them, a study of 40,530 participants who drank more than five cups of green tea a day resulted in a 26% lower risk of death from heart attack or stroke!

According to an article in pubMed, green tea has many positive effects to the oral health.

Here are some that are indicated.

Since green tea is a low-to-non calorie drink, it would be a good replacement for your sugared drinks. But the possibilities do not stop there.

It has shown more and more evidence to help weight control as indicated in pubMed.

7. Impact of Green tea on the skin

Vitamin C is the beauty agent of the skin.

It facilitates collagen synthesis - which will strengthen the skin and provide elasticity and hydration. This may help the aging of your skin. The anti-oxidation effects of Vitamin C is also said to protect the skin from UV damage.

Green tea is loaded with Vitamin C. Sencha for example, contains from three to five times the Vitamin C of a lemon!

In addition to this, the antioxidants and nutrients in Green tea have been said to have impact in tackling skin disorders like psoriasis.

In a research conducted in 2007 where it was tested on animals experience skin disorders indicated by overproduction of skin cells, flaky skin, dry or red patches on the skin. The skin cells treated with green tea indicated some slow but impactful changes, slowing down skin cell production and correcting other disorders.

Convinced that green tea is great for your health?

That's great - our recommendation is to start with a cup of Japanese green tea everyday. Try a few different types and find one that you like. Enjoy the process.

Let our Japanese Tea-Pedia assist you in that!